09 اردیبهشت 1400
How to Talk to Kids About Climate Change

As our planet gets hotter, weather patterns grow more severe, sea levels rise and wildfires become bigger and more frequent, answering children’s questions about the future can be a daunting task. Kids know that the world is changing, and understandably have fears about what life will be like. So, what can parents do? 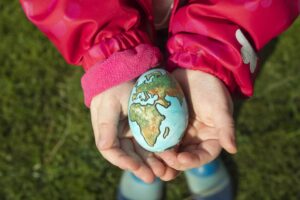 According to kids news agency,Heather Goldstone remembers the moment clearly. Her sons were ages 5, 7 and 9, and slept in the same bedroom in their house in Cape Cod, Massachusetts. One night, as she was tucking them all in, when her middle son spoke up.
“He said, ‘Mama, I learned today Cape Cod won’t be here in the future because of climate change and it’s just not fair,'” she recalled. “Well, that was news to his younger brother, and my oldest already had a highly developed sense of righteous indignation. So within a few minutes, all three were in tears.”
For any parent or caregiver, answering children’s questions about the future can be a daunting task as our planet gets hotter, weather patterns grow more severe, sea levels rise and wildfires become bigger and more frequent. Kids know that their futures will be in an altered climate, and understandably have fears about what life will be like. So, what can parents do?
Luckily, there are a lot of experts who are parents themselves who can help. Here are some of their tips.

As a climate change expert, chief communications officer of the Woodwell Climate Research Center, and previously host of the science-focused radio show, “Living Lab Radio,” as well as a writer for Climatide, a blog about coastal communities facing climate change, Goldstone was ahead of the game when her kids started crying.
“I told them, ‘Cape Cod will be here, but you’re right; it will look different,'” she said. “‘And you’re right that it’s not fair that [past] generations have made this problem and you have to deal with it, but we don’t have to sit there and cry about it, we can talk about it and do things. What would you like to do?'”
She said they came up with the idea to put up yard signs all over their town of Falmouth saying, “Stop climate change it’s not fair.”
“Having that action item that they can do something, they all felt better and all fell asleep,” she added.
“There are things we can all do, and we can involve kids in those action items,” she said. “That conversation with my kids drove home the power of talking about action even in the face of this dire message, that we can do something about it.”
Goldstone’s oldest son is 14 and she says that recently, after attending a climate protest, “he decided it’s silly we have six school buildings around Falmouth and no solar panels,” she said. “So we looked up the sun number for all the schools, and they had a perfect score for solar, so he wrote a letter saying, ‘This is ridiculous, we need to do basic things, you have roofs perfect for solar, let’s put solar on them.'”

As a family, Goldstone said they recently moved closer to town so they can bike to school and to the grocery store and are putting solar panels on their roof. They have decided their next car will be electric, and they work to “buy less plastic, waste less food and drive less,” she said.
“The reality is in the big picture with climate change, we don’t know if it’s going to turn out well, but we do have success stories and know things we can do,” she said. “It’s not about watering it down. I can say, ‘It’s scary for me, it should be scary for all of us,’ but develop the understanding that things we do matter.”
She also follows the advice she gives regularly at her job about how to communicate about climate change with adults.
“For me, the core things to try to remember when talking with my kids are the same as when talking with anyone struggling with climate change,” she said. “I affirm the fear and worry and how big it is, but also emphasize agency and empowerment, what we can do, what we can save, and the power that can have, and showing success stories and examples, where people have made a difference.”
Heather Benway, a carbon and climate change scientist at the Woods Hole Oceanographic Institution, who is also a mom to a 9-year-old and a 13-year-old said it’s also helpful to talk to kids about the history of the planet and how things have changed drastically in the past.
“You can look back in time, and things have been wildly different and human civilizations have persisted,” she said. “My kids are not anxious, not freaking out about the future, but I keep conversations upbeat and optimistic. [I say] here are choices we can make, for example who we vote for. And when they look ahead to career choices, there are lots of things they can do, so many fields where there’s so much opportunity, engineering feats that haven’t been realized.”
Benway has also mobilized her kids to take action around their town. For example, her kids have been helping to get restaurants to stop using plastic straws and tiny alcohol bottles.

Talk About It When Kids Ask

Climate change experts like Goldstone say there are ways to talk to kids — and really anyone — about these changes that don’t sugarcoat reality, but also don’t leave them feeling hopeless and powerless.
Helen Amanda Fricker, a glaciologist who studies ice in Antarctica, has been talking with her three kids, ages 11, 15, and 17, about climate change since they were all young.
“I think I went into the kindergarten classes and talked about climate change in the context of penguins. From the beginning, I never didn’t mention it,” she said.
Goldstone said she doesn’t sit down and say, “Let’s have this tough conversation,” but waits for her sons to bring it up.
… The core things to try to remember when talking with my kids are … I affirm the fear and worry and how big it is, but also emphasize agency and empowerment, what we can do, what we can save, and the power that can have …

“I let them ask, and then give them the most minimal answer, so I don’t lie but don’t go into every detail,” she said. “For example, when they ask a big question like, ‘What does it mean that it’s going to be so much hotter?’ I don’t have to go into full detail, I’ll give a truthful answer, and then they’ll ask if they want more detail.”
Like Goldstone, Benway said she does not try to have any planned talks about climate change with her kids because “they’d run out the door,” she said. “But they are very curious, so they have a lot of spontaneous conversations.”

Do Your Best to Explain the Science in Simple Ways

For Fricker, part of the problem is that sometimes, kids don’t really understand the big picture because they’ve grown up hearing bits and pieces from the adults in their lives.
“I just think that there’s a lot of disconnect,” she said. “My kids come home from school going, ‘Oh, we’ve got to recycle’ and they don’t understand why. Nobody understands why. So in the end, people think that drinking straws are the biggest issue. They are important, but they’re not the biggest issue. The big issue is that we’re burning too many fossil fuels and putting carbon dioxide in the atmosphere. That’s the number one thing. That’s a cause-and-effect part that a lot of people seem to miss. Kids haven’t been taught that. So I’ve always made sure that they understand their choices that they make with everything can affect emissions. And that’s what we’re all about trying to pull our emissions down.”
Whenever her kids ask her a question about the science of climate change, Benway uses her work as a researcher to explain things on their scale.
“In the experiments we do, I try to tie in human action and the impact it has on the environment, and how it can feed back to us,” she said. “For example, if you’re driving a car every day, it emits this much CO2, and you can calculate what impact that has.”
Fricker said she remembers taking her daughter and her friends to the aquarium long ago, where there was an exhibit on rising CO2 levels. To help them understand the problem a little bit better, she explained that carbon dioxide was acting as if it were a heavy blanket wrapped against the world, making things too hot.
Experiments can also be great ways to help explain the situation to kids.
Benway does an experiment that shows ocean acidification by taking a cup of sea water and adding cabbage juice, which turns the water purple because of its pH. Then, her kids blow bubbles into the water to add Co2.
“You can see the water turn from blue to purple to pink, see the impact of CO2 on the water, and then tie that back to what happens when you add CO2 to the ocean,” Benway says. “That impacts critters living there, and I’ll say, ‘We’ve made this change over the last 50 years, so those organisms don’t adapt that fast.’ My younger daughter loves talking about organisms and how we’re all connected together. For example, [in the case of] teeny plankton in the ocean, people don’t realize they’re swimming in the ocean around them, and they produce half the oxygen in the ocean, that there’s this delicate balance.”
And as Goldstone said, no matter what age kids are, “We don’t have to water down the message, and we can give them the feeling [that] they can do something about it.”