In a grim reminder of the death toll from COVID-19, a new study published by the American Medical Association found that nearly 40,000 U.S. children have lost one of their parents to the virus. 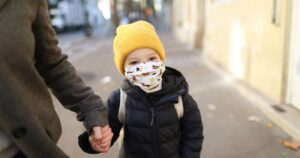 According to kids news agency,It’s a heartbreaking new angle to the number of U.S. deaths since the pandemic began – ۵۵۵,۲۷۳ as of Monday afternoon, according to Johns Hopkins University.
“This may come as a surprise, since 81% of lives lost in the US have been adults 65+,” study author Rachel Margolis, an associate professor at the University of Western Ontario, tweeted. “However, we are also seeing high mortality among younger adults, many of whom have children under 18.”
The study, which was published in JAMA Pediatrics, used publicly available death, demographic and kinship data – not surveys – to arrive at its projection that 37,300 children have lost a parent. The researchers also ran the calculation taking into account deaths indirectly due to the pandemic and found that, in that scenario, the number of children affected jumped to 43,000.
“The number of children experiencing a parent dying of COVID-19 is staggering,” the study’s authors wrote. “For comparison, the attacks on September 11, 2001, left 3000 children without a parent. The burden will grow heavier as the death toll continues to mount.”
The study found that 20% of children who lost a parent to the virus were Black, despite Black children only making up 14% of the population of U.S. children.
“Our analysis highlights the shadow population of bereaved family members, and gives us a method to track the toll of parental bereavement as the pandemic evolves,” according to Margolis. “For every 13 COVID deaths, one child under the age of 18 loses a parent.”
In a herd immunity scenario in the United States in which steps such as wearing masks and physically distancing aren’t taken, the study’s projections found that 116,900 children would have lost at least one parent.
“Children who lose a parent are at elevated risk of traumatic grief, depression, poor educational outcomes, and unintentional death or suicide, and these consequences can persist into adulthood,” according to the study. “Sudden parental death, such as that occurring owing to COVID-19, can be particularly traumatizing for children and leave families ill prepared to navigate its consequences.”
The researchers are calling for “sweeping national reforms” to help treat the grief and emotional pain children who lost a parent to the pandemic are suffering. The researchers said that such intervention could help keep them from developing life-altering psychological problems as they grow up.