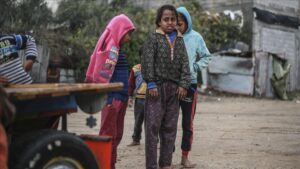 According to kids news agency,Wandering across the streets of Gaza City, 12-year-old Ahmed tries to convince passers-by to buy the masks he sells as a way of making ends meet. His boss expects him back before sunset or else young Ahmed risks being beaten.

Ahmed is just one of the hundreds of Palestinian children engaged in different forms of labor in the occupied territories due to extreme poverty caused by the Israeli occupation and inter-Palestinian divisions.

April 5 marks the Palestinian Children’s Day, which was approved by late President Yasser Arafat in 1995.

As Palestine marks this day, the conditions of the Palestinian children continue to worsen amid the outbreak of the coronavirus pandemic.

School dropouts
To stem the spread of the virus, schools across the world switched to online education. For 8-year-old Rami Al-Khatib, this option was not accessible despite Palestinian authorities asking schools to resort to e-learning.

His poor family was not able to provide the little boy with the necessary materials for online education.

“We were not able to afford internet services and a laptop or a mobile phone for Rami,” his mother Doa’a told Anadolu Agency. “This meant he was deprived of education and it affected his performance.”

Al-Khatib’s case is not an isolated one.

Speaking to Anadolu Agency, Basim Abu Jeri, a researcher at the Al-Mezan Center for Human Rights, said 34.83% of students in Palestine were not able to join the virtual classes because “families do not have smart devices or access to the Internet”.

According to Abu Jeri, distance education “does not guarantee equality for all in access to education” since many families are barely able to “provide the basic necessities for their children”.

He warned that lack of access to education might increase the number of school dropouts and force children to pursue dangerous adventures “such as infiltrating Israel”, noting that 71.4% of the children arrested while crossing to Israel were school dropouts.

Researcher Hussein Hammad, who also works with the Al-Mezan Center for Human Rights, blames the multiple challenges Palestinian children face in various sectors for reducing their chances of obtaining their basic rights.

He singled out the Israeli occupation for undermining the chances of Palestinian children to access their rights, especially with regard to “mobility, medical treatment, and life”.

“Israel continues to violate the rights of children, whether in Gaza or the West Bank, through arrests, physical or psychological harm, or restricting their movement,” Hammad said, explaining that sick children in Gaza are blocked from seeking better treatment in hospitals in the West Bank or Israel.

He also blamed the inter-Palestinian divisions for disrupting the provision of services to children, while highlighting the role of the occupation in impeding the implementation of the Convention on the Rights of the Child accorded by the international law.

In a report on Sunday, the Palestinian Prisoner Society (PPS) said Israeli authorities have arrested 230 Palestinian children since the beginning of this year, with two of them in administrative detentions and under harsh conditions.

The Palestinian branch of Defense for Children International (DCI) said in a statement that 85% of the children arrested last year were “subjected to physical violence”, while 27 children placed under solitary confinement.

The rights group also said nine children were killed in the West Bank and Gaza Strip in 2020.

Hammad described year 2020 as “bad” for Palestinian children due to the implications of the COVID-19 pandemic, acute poverty, and abuse by Israeli authorities.

According to Hammad, overcrowded schools increased the chances of virus infection among children.

He argues that the pandemic has exacerbated poverty in the Palestinian territories, pushing many children to resort to labor and begging.

Aziza al-Kahlout, a spokeswoman for the Ministry of Social Development, estimates that 400 child beggars stroll in Gaza streets as a result of poverty and divorce.

“The difficult conditions in the Gaza Strip have led to an increase in the rate of divorce,” al-Kahlout said, without specifying the number, which she said caused “family disintegration and the displacement of children.”

To improve the conditions of children in Palestine, Al-Kahlout revealed plans by her ministry to launch a national program for social protection which aims at benefitting more than 195,000 children under the age of 18.

More than two million Palestinians living in the Gaza Strip continue to suffer from deteriorating economic and living conditions as a result of the Israeli blockade imposed on the territory since 2006.

Estimates by the Palestinian Central Bureau of Statistics show that as of 2020, nearly half of the Palestinian population in Gaza and the West Bank are under the age of 18.