The World Health Organization is investigating whether the coronavirus causes some children to develop a rare inflammatory disease, WHO officials said Wednesday. 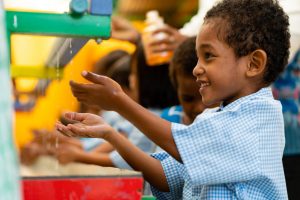 According to kids news agency, Health officials in the U.K. warned doctors over the weekend that Covid-19 could be causing a rare inflammatory condition in children. Britain’s Pediatric Intensive Care Society said Monday the National Health Service alerted it to a small number of critically ill children presenting with “an unusual clinical picture.”

The society noted that many — but not all — of the children with symptoms of the new inflammatory disease had been diagnosed with Covid-19. The condition was likened to toxic shock syndrome and Kawasaki disease.

“We are aware of this report which came out of the United Kingdom about a small number of cases amongst children with this inflammatory response,” WHO’s lead scientist on Covid-19, Dr. Maria Van Kerkhove, said Wednesday. “We’re looking at this with our clinical network.”

Toxic shock syndrome is a rare, life-threatening condition caused by bacteria getting into the body and releasing harmful toxins. Symptoms include a high temperature, a sunburn-like rash and flu-like symptoms such as a headache and sore throat.

Kawasaki disease causes swelling of the heart’s blood vessels and mainly affects children under the age of 5, according to the U.K.’s NHS. Symptoms include a rash, swollen glands in the neck, dry or cracked lips and red fingers or toes. The Mayo Clinic says it is usually treatable.

It remains unclear what the relationship is between Covid-19 and the inflammatory conditions, but Chris Whitty, England’s chief medical officer, told reporters Monday it is “entirely plausible” that Covid-19 causes the illness.

“There are some recent rare descriptions of children in some European countries that have had this inflammatory syndrome, which is similar to the Kawasaki syndrome,” Van Kerkhove said. “But it seems to be very rare.”

The WHO has asked its global network of clinicians to be “on alert” for such cases around the world. The coronavirus, which is primarily a respiratory disease, is affecting more than just the lungs, as first thought, said Dr. Mike Ryan, executive director of WHO’s emergencies program.

“Obviously it’s causing inflammation and attacks tissue other than lung tissue,” he said. “We are in a situation where clinicians are looking at what those other effects of having this coronavirus infection are.”

It’s “very important” that researchers look further into such reports to better understand the nature of the virus and the disease it causes, Ryan said. He added that the condition remains very rare.

“Kawasaki syndrome is a syndrome that’s been around for a long time,” he said. “It’s a rare condition. It happens. It usually resolves itself.”

British Health Minister Matt Hancock told U.K. radio station LBC on Tuesday that he was “very worried” about the recent reports of children presenting with the new condition. However, the WHO emphasized the condition appears to be rare.

“We don’t know yet” if it is fatal, Hancock said. “It’s a new disease that we think may be caused by the Covid-19 virus — we’re not 100% sure, because some of the people who got it hadn’t tested positive, so we’re doing a lot of research now, but it is something we’re worried about. Although it is very significant for those children who do get it, the number of cases is small.”