As the first clinical trials in young children start, here’s what scientists want to know. 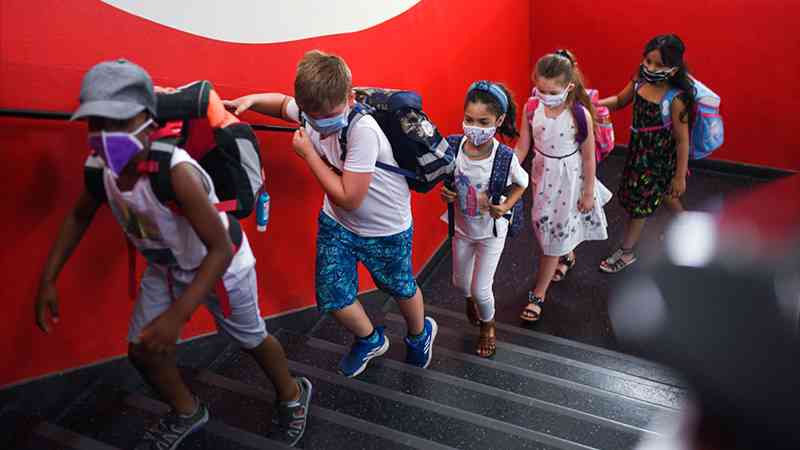 According to kids news agency,Parents are clamouring to enrol their kids in the first COVID-19 vaccine trials in young children. “Somebody told me they called and called and called until they were allowed to participate,” says Kawsar Talaat, an infectious-disease physician and vaccine scientist at the Johns Hopkins Bloomberg School of Public Health in Baltimore, Maryland. She is part of a trial that began testing the Pfizer–BioNTech vaccine in children under 12 in late March.
As such trials get under way — Moderna began a similar study of its vaccine last month — scientists are seeking answers to important questions about how safe and effective the vaccines are in kids.
Nature looks at how the trials will account for differences in children’s immune systems and susceptibility to COVID-19, compared with those of adults, as well as the added safety precautions that surround medical research in kids. “Children are not little adults,” stresses Talaat.

Do we even need to vaccinate children?

Children rarely develop severe forms of COVID-19, and deaths from the disease are rarer still. On rare occasions — one estimate1 puts it at around one case in 1,000, although it could be even lower — kids who’ve experienced even mild infections can later develop a sometimes deadly condition called multi-system inflammatory syndrome in children (MIS-C). “I’m tired of seeing sick kids. I want to see them protected,” says James Conway, a paediatric infectious-disease specialist and vaccine researcher at the University of Wisconsin–Madison.
Evidence is building that vaccines might block transmission of SARS-CoV-2, so vaccinating children could have beneficial knock-on effects in the wider community. “If we really want to get back to normalcy, we really need to achieve herd immunity across all the groups that potentially contribute to transmission,” Conway adds.
Children, particularly younger kids, probably aren’t super-spreaders of SARS-CoV-2, as they are for viruses including influenza. But the emergence of faster-spreading variants, along with rising adult vaccination rates in some countries, means that children and adolescents might soon be contributing more to spread. “COVID transmission is now hottest in younger people. The virus will find ways to survive and spread unless we close off the pathways,” says Talaat.

How will the trials in kids work?

In some ways, vaccine trials in children under 12 years old will be a replay of early trials in adults. The first recipients — who will be on the older end of the spectrum, although trials will eventually include children as young as six months — will receive a range of doses to find one that triggers a strong immune response without too many side effects. “Some of them are too much, some of them are too little. You’re looking for that sweet spot,” says Conway. “It’s the Goldilocks effect.”
Once an ideal dose is identified, several thousand participants will be randomized to receive either two doses of vaccine or of a placebo injection. Researchers will then follow the children for months and even years, to study the safety and effectiveness of the vaccines.
In adult trials, participating individuals provide informed consent. When participants are children, however, their legal guardian must agree to their involvement. But researchers are also obliged to obtain assent from any child participants old enough to understand the trial, says Beate Kampmann, a paediatric infectious-disease specialist and director of the Vaccine Centre at the London School of Hygiene & Tropical Medicine. “Our kids are savvy, they understand. They’ve heard about this all year,” says Talaat, who generally seeks assent from kids aged five and over — and sometimes younger, depending on the child.

Will children and adults respond differently to COVID-19 vaccines?

Children’s immune systems are brimming with cells that haven’t seen pathogens, so they tend to produce a strong immune response to vaccines, says Donna Farber, an immunologist at Columbia University in New York City. “It’s those first few years of life, where you’re learning about pathogens.”
Early trial results have shown that 12–۱۵-year-olds who received two standard doses of the Pfizer–BioNTech vaccine developed substantially higher levels of virus-blocking antibodies than did 16–۲۵-year-olds in earlier trials. Farber wonders whether children who are even younger will get the same immune response from a lower dose.
Children’s potent immune responses mean that they are more likely than adults to develop a fever after vaccination, says Talaat, so researchers will need to strike a balance between triggering a strong immune response and minimizing the side effects that come with it. However, this might not be such a problem, because children seem to be less bothered by fevers than are adults, says Farber.
As COVID-19 vaccines are tested in ever-younger children, researchers will want to make sure they’re not interfering with immunity generated by routine childhood vaccinations, says Kampmann. The Pfizer–BioNTech trial plans eventually to enrol children under five who may still be due to receive boosters of polio vaccines and jabs against measles, mumps and rubella, as well as other immunizations, but Talaat says children will need to be up to date on their vaccination schedules to participate. Studies of how a COVID-19 vaccine should best be integrated into a child’s immunization schedule will need to come later, she adds.

How will scientists know if vaccines work in children?

We know that vaccines prevent COVID-19 in adults because the clinical trials were designed to show this. They involved tens of thousands of people randomly assigned to receive either the vaccine or a placebo, and showed compelling differences in the rates of disease between the two groups.
In the paediatric trials, which will involve only a few thousand children, there might be too few symptomatic infections to measure efficacy in the same way, says Talaat. It makes more sense, she says, to look at immune markers after vaccination. “If we see the paediatric immune responses are the same or better than we saw in adults, we can make inferences that the vaccine will be effective.” Both the Moderna and the Pfizer–BioNTech trials list such markers as their primary measures of success.
Conway would like to see good evidence that the vaccines can actually prevent COVID-19 in kids. The Pfizer–BioNTech trial in adolescents recorded 18 cases in the placebo group, and none in those who got the vaccine, so it’s not inconceivable that trials of younger kids will also show such efficacy, says Talaat, but it will depend on community infection rates.
However, if the primary aim of childhood vaccination is to stop transmission, trials should show this, says Christiane Eberhardt, a physician-scientist in clinical vaccinology at the Geneva University Hospitals in Switzerland. This would ideally involve frequent swabs in kids — unlikely to be popular — and in unvaccinated family members. Instead, the Moderna and Pfizer–BioNTech trials intend to look at blood markers of asymptomatic infection, which Eberhardt sees as acceptable under the circumstances. “That’s the closest you can get.”

How will researchers know if the vaccines are safe in young children?

Safety is paramount in clinical trials involving children, and researchers are aware that COVID-19 vaccine trials in kids will get extra scrutiny. “Anything that smears vaccines in general, and makes people question the safety of vaccines in kids, is a step backwards from a public-health standpoint,” says Conway.
Early adult trials paid close attention to the possibility that people who received the vaccine could develop ‘enhanced disease’ if they later became infected. The trials found no evidence for this, but Conway says that paediatric trials should look for immune responses that might exacerbate disease, as well as signs that participants are developing immune reactions similar to those seen in MIS-C.
It is not yet clear how concerns over very rare blood clots potentially linked to the Oxford–AstraZeneca and Johnson & Johnson vaccines will affect paediatric trials. The University of Oxford, UK, has paused a small trial in kids aged 6–۱۷ that began in February. Johnson & Johnson announced at the start of April that it was set to begin including adolescents in an ongoing trial of its vaccine, but has since paused all its trials as the clots are investigated.